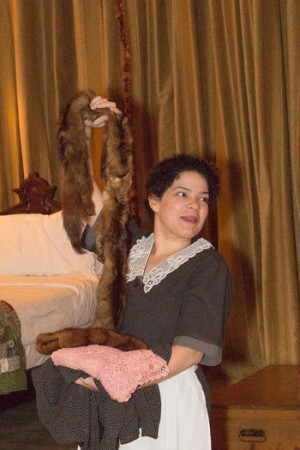 In his works, composer Gian Carlo Menotti demonstrates an understanding of different types of comedy. In its three presentations of his works, Florida Opera Theatre has smartly matched Menotti's comic shadings.

In 2012, the avaricious relatives of "Gianni Schicchi" conducted their funny business in an atmosphere of bitterness. In January, the young love of "The Telephone" drew laughs with its lighthearted sweetness. Now in "The Old Maid and The Thief," given two performances this weekend, Menotti's story is delivered with a knowing wink to the audience. "This is human nature," it seems to say. "Who knows to what lengths loneliness and infatuation will drive us?"

These subtleties of tone are a credit to director in residence Eric Pinder. Without grand sets or overly fussy costumes, Pinder creates an inviting little world with each work — not pretentious but engaging. His work is neatly complemented by music director Robin Stamper, who lets the singers capture Menotti's characterizations while staying true to the music.

"The Old Maid and the Thief" was written in 1939, but is easily relatable for anyone who has lived in a small town (or gossiped on the Internet). Lonely spinster Miss Todd and her man-hungry maid, Laetitia, invite a good-looking beggar named Bob into their home. To keep him there, the women resort to more and more outrageous behavior — but Laetitia is secretly playing her own game.

Observing the household but never quite putting two and two together is another spinster, local busybody Miss Pinkerton.

Right from the start, Menotti's English libretto captures the rhythm of gossipy old women talking. "Isn't the weather awful?" is a constant refrain, interspersed with catty personal observations of their acquaintances. A handsome man wins approval; his wife — who is fat — draws the old biddies' scorn.

The singers give no doubts as to their personalities either: The first narrowing of the eyes from Jennifer Ashpaugh Boles, as a clear-voiced Miss Pinkerton, tells you this is the kind of woman who watches her neighbors from behind twitching curtains.

Janet Rabe-Meyer's foolish Miss Todd is beautifully self-deluded. She imbues her singing voice with character, giving comic vitality to such pronouncements as "My blood is the bluest in town."

Luis Enrique Rivera — as Bob, the object of everyone's affection, — has a pleasing baritone and sings the most tuneful aria of the show, "When The Air Sings of Summer." Here, the comedy stops for Menotti's ode to freedom and the open road, and Rivera handles the reflective interlude with the right amount of gravitas.

But it's Maria Leticia Hernadez who drives this endeavor. Eyes flashing as Laetitia, she schemes and dreams with gusto, breaking into a million-watt smile and hitting high notes with equal aplomb. Although Laetitia reveals her true colors early on, Hernandez's determination is so infectious, you can't help but root for her. That's just human nature.

'The Old Maid and the Thief'

• What: A Florida Opera Theatre production of the Gian Carlo Menotti comic opera